Posted on January 6, 2013 by brokeandenglish

We took a boat this morning across the bright waters to Vipeen Island, to the north of Cochin’s old city. One of the gentlemen I had chatted to the night before had told me of a beach called Chitrai up along the coast that was particularly nice. We had both been in a mood for a swim for some time, not having got our toes wet since the pleasures of Varkala beach. The temptation to swim near a city such as Cochin was not so great as to override the sense of caution that one must have in a country where the sewage infrastructure is co-ordinated towards the nearest natural body of water.

As the bus trundled up the straight coastal road, the green vegetation closed in again, reminding us once more of the greenness of the Sri Lankan highways. As we walked through the greenery and down the path towards the beach, we would occasionally emerge out into large, open backwaters like those we had navigated only a few days before, with more spider nets dotted across the far shores of the open waters. Were these devices owned by individual families? Could one just build a spider net? Where even were the houses, amongst the thick vegetation that crowded the water’s edge?

After a journey like that, the beach was somewhat disappointing, being limited to short strip of sand between the road that we had arrived upon and the choppy sea. The space that was sandwiched between the road that ran along the top of the beach and the choppy water was filled with families, groups of boys and line kite fliers. School was, it seemed, well and truly out for the summer. We continued north along the beach for a mile or two. The heavy concrete wave-breakers that hogged the sand in awkward, jagged piles occasionally forced us into the unpredictable surf from time to time. Occasionally, a dash across a stretch of clear sand would be cut short as a wave would catch us off guard. There was a strange surf off the beach, perhaps following a storm or due to the beach dropping away sharply beneath the water; as the rough waves crashed up the short beach that we traversed, another similar-sized wave would fall back towards the sea from the previous wave, so that the two would often collide with a hearty slapping sound. The result was a writhing, twisting surf just a few feet off the steep sand-line. It looked far too dangerous to swim in. 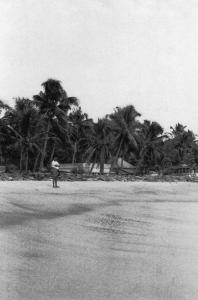 We spent the afternoon lazing on the empty sand far up the beach. We didn’t escape the wave-breakers but we did escape the crowds. Beyond the wave-break levees that lined the top of the beach, settlements hugged the coastline, trickles of smoke silently floating up from the chimneys of the various wooden houses that disappeared off into the quiet palm-tree forest further inland. From time to time, locals would slowly saunter past or approach with a quick greeting and a stilted few words, before lasping into a silence as they watched the world go by as we did. In time, they would saunter off again down the beach to some other, similarly lazy rendezvous with the other pass-timers along the beach.