May 2nd – Music and mosquitos

Posted on January 15, 2013 by brokeandenglish

Today was spent further exploring the quiet streets of Cochin and mingling with other travellers that traversed its sea-facing walk-ways. As a small group of multi-national travellers (consisting of three Brits, a Singaporean girl and a Swiss/Chinese couple), we attended a concert of traditional Keralan music on the other side of town that night. Although somewhat under-attended, the small, low-lit bar that was hosting the event provided the perfect arena; only a few feet separated us from the three musicians playing a tabla, a veena and a tarang. These three instruments provided the archetypal sound that may come to mind when imagining traditional south Indian music; the stringed veena provided the wobbly, twisting, hypnotic body of the music, while the tarang – akin to a large, double-ended bongo with a rather deep, wobbly sound – and the sharper tabla would jut in and out of the flow of the various phases of music. None appeared to have a beginning or end to speak of.

Indeed, the entire concert appeared to be one long jam session, relying on the rhythm of each of the players and more that a little co-operation and communication. The veena, which appeared to be somewhat leading the show, resembled a very large banjo that is played flat on one’s lap, with a deep central chamber and the addition of an unusual circular bulge beneath the far end. The body of the instrument rests alongside the player, while this smaller bulge can be manipulated by the pressure the player exerts on the top end of the fretboard as it as it sits in their lap. This pressure alters the tension of the strings, just as a tremolo arm would on a guitar, thus creating the twisting, gyrating sound that makes the instrument so distinctive. 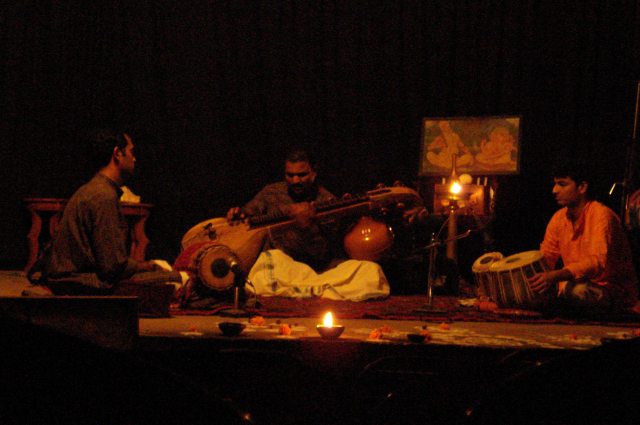 The enchanting traditional music of Kerala, featuring the tarang (left) the veena (centre) and the tabla (right).
-Cochin, India-

The sheer size of the instrument as well as the physical process of playing it provided the music with a physical presence through the musicians. As the veena player swayed and flowed with the sounds the he was creating, he would glance to either side of him as the three men co-ordinated their piece; as the instruments fell away to leave the veena player on his own tangent, the twirly, jerky plucking and bending of the notes was accompanied by the equivalent movement of his entire body like some kind of sporadic seizure. Between each of the fits of sound and movement, he would be looking up at one of the other players. The mantle, through these glances, would be passed from one to another, so that the tarang would pick up the rhythm and take it in a different direction before passing it over the circle to a different player, like a hot potato or a musical word-game. This dynamic between the three players created a thoroughly hypnotic atmosphere in the thick environment of incense, mosquitoes, heat and darkness, so that I was working hard to resist the temptation to indulge in these aurally-induced spasms myself. 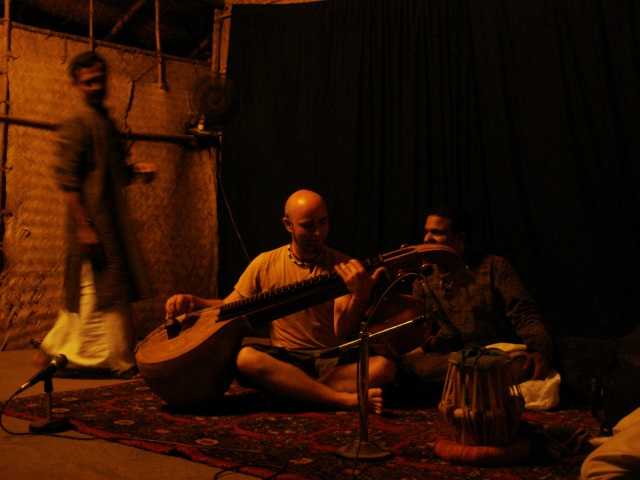 Our new Swiss friend was an accomplished guitarist and had a go afterwards…
-Cochin, India-